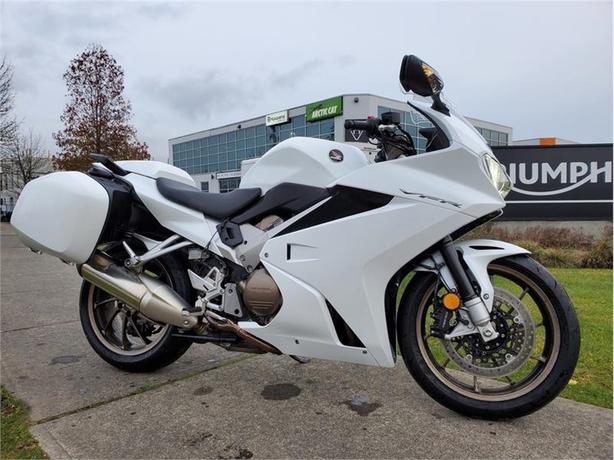 2014 Honda VFR®800F
The VFR®800 aficionados border on fanatical. They demand the very best in their machines and are reluctant to settle for anything less. This can make changing the VFR® a risky proposition at best. Operational changes have to improve function while maintaining the delicate balance between performance and comfort that the VFR® is so famous for. Similarly, changes to the styling have to respect the original while providing an elegant, contemporary look. Finally, the VFR® has always been a technological leader, so cutting edge technology is an essential part of the VFR® formula. Oh, and it has to be available in red.
VFR® enthusiasts rejoice, the new 2014 VFR®800F has all this and more.
The legendary and trademark V4 engine has been retuned for even more, low-end and midrange power, while the VTEC transition has been softened to provide strong linear power throughout the rev range. The twin-spar aluminum chassis features an all-new Pro-Arm single-sided swingarm as well as an all-new 43 mm front fork redesigned to accommodate radial-mount, four-piston brake calipers. Styling has returned to a more traditional VFR® silhouette with a single, low-mounted muffler, replacing the twin under-seat exhausts. Considerably slimmer through the middle, the VFR® is also a full 10 kg lighter than its predecessor, making it significantly easier to manoeuvre.
Retaining VTEC, Pro-Arm single-sided swing arm and ABS brakes, the new VFR® adds traction control, LED headlights, sophisticated self-cancelling turn signals and an optional shift assist system to its technological credentials. Final touches include an adjustable seat