We recognize that the financial impact of COVID-19 means that many people may need to find ways to both save money by purchasing secondhand items or to earn extra income by selling gently used items.

For more information, go to used.ca/COVID19 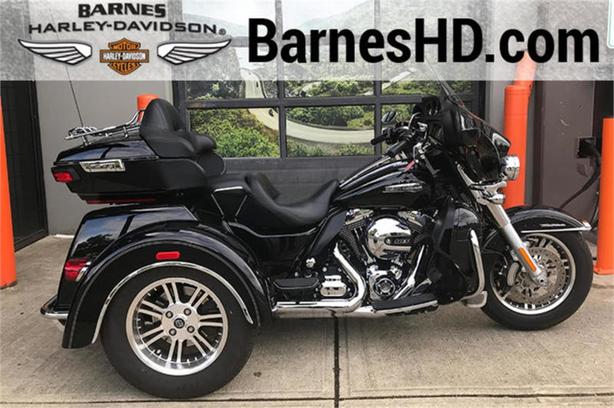 How much motorcycle can you fit on three wheels? One look at the Tri Glide® Ultra motorcycle and you'll have your answer.
There's more than an added wheel at work here.

The Tri Glide® Ultra model is everything you love about the Harley-Davidson® touring tradition, only more. You get every Project RUSHMORE feature and improvement applied to our three-wheel frame design. You also get the confidence of front to rear linked brakes. It all adds up to better miles and more comfort than a vibrating motel room mattress. Get into the middle of nowhere on this one and you won't be coming back anytime soon.

Control
Project RUSHMORE started out as a way to re-think the venerable Harley-Davidson Touring motorcycle from fender tip to fender tip. It's turned into a never-ending quest. Each year the going just gets better for the rider who points one of our bikes down the highway.

Infotainment
When we go to work on the infotainment system for a Harley-Davidson Touring motorcycle we follow one simple principle. If you're going to live in the saddle of a top-end touring bike, you deserve better sound than most people have in their living rooms.

Feel
Starting with the days when early riders bolted plastic windshields to their machines and began crisscrossing the country, the Harley-Davidson Touring motorcycle has already gone places no one could have imagined. We began Project RUSHMORE to discover what comes next. When it came to rider comfort, that meant getting in the saddle and putting in miles.

Style
With a name like Project RUSHMORE, you know we were aiming high when we set out to rethink what riders experience on our Touring machines. These weren't just motorcycles. They're part of the American landscape. So we set about perfecting the way they work, feel and look the only way we could. By riding. Millions of miles. Countless hours. More grueling road tests than any sane person would ever want to endure.