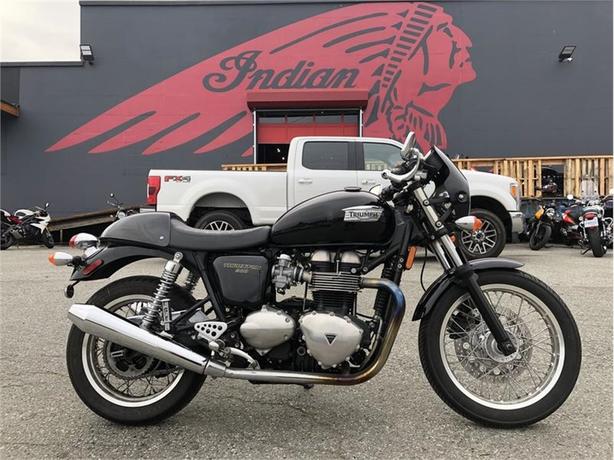 Price: $7,498
Stock Number: 620589
VIN: SMT920K16ET620589
2014 Triumph Thruxton
The Thruxton is born of the café racer culture that dominated motorcycling in the 1960s.
Back then, British twins, usually Bonneville engines, were used to form the basis of home built bikes. Used to race from one café to another, they featured extensive modifications such as dropped bars, single seats and upswept exhausts.
To this day, we've kept many of these styling cues for the modern Thruxton. Named after the high speed British circuit where Triumph enjoyed great success in production racing, it follows in the tyre tracks of the legendary 1960s Thruxton T120R.
And just like those café racers of the 60s, the modern Thruxton is Bonneville based but nowadays, our engineers have made sure it rides like a modern Triumph twin. So it's dependable enough for everyday use, easy and fun to ride yet still evokes the classic café racer look.

Standard Features May Include:
StylingWe created a style for the Thruxton that echoes the 1960s café racers. Back then, machines were modified by their owners for higher speeds and sharper handling.
We used classic 1960s paint schemes with period sports stripes and fitted a typical single-seat, or so it looks thanks to the rear cover. In actual fact a passenger can enjoy the ride on a Thruxton too.
HandlebarsLow and narrow 'Ace' handlebars, named after London's famous Ace Café, with classic bar-end mirrors sit behind a colour-coded flyscreen.
InstrumentsTwin instrument pods sitting high on their top yoke mounting position.
EngineThe café racers were built to perform, not just to look good. Today, this 865cc parallel twin puts out a healthy 69PS with 69Nm of torque at its peak, with plenty available at low revs so you get most use out of it. Fuelling is controlled by a sophisticated computer programmed management system for clean emissions and a smooth, predictable throttle response.
ConfigurationThe basic format is the same as the current Bonneville, with 360 degree firing intervals, double overhead cams, eight valves, twin balance shafts and fuel injection. So you know it's a thoroughly modern engine that, despite its convincing old-school looks, easily meeting Triumph's high standard of reliability, durability and efficiency.
FrameAll